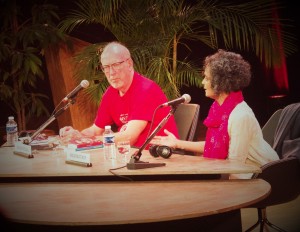 Arundhati Roy is author of The God of Small Things and many essays on contemporary issues ranging from culture, the environment, politics and more particularly Indian politics.
On Saturday morning, 15th October, during the weekend of the 2016 Fête du Livre devoted to the works of Arundhati Roy, students from the Lycées Georges Duby and other local international sections asked questions to Ms Arundhati Roy, the author of the Booker Prize winning novel « The God of Small Things », for close on 2 hours.

Ms Roy was received very warmly as she spoke at length about her involvement in the politics of contemporary India, often referring to « The God of Small Things »   – which all the students who were present are currently studying as part of their English Literature programme for the OIB – and giving us a glimpse of her new novel, « The Ministry of the Utmost Happiness ».

Below are some of the ‘food for thought’ she offered the student audience, in response to their many questions.

“Language is like the skin on my thought. The English I write has been fashioned by and contains the imagination of many other languages. »

« India is a country where several centuries coexist simultaneously – from the 21st century to the 6th century – and it is a complex cauldron of languages. »

« At the centre of the book is a broken heart. In the new book, the heart is shattered, it is in smithereens, but this doesn’t mean that such a heart can’t be carefully put back together again – piece by piece – and be better for it. »

« Hope has nothing to do with reason. Even if we know we are going to lose, we don’t want to be on ‘the other side »

« I’m not brave, I’m not courageous ; I’m just … naughty ! I’m not controversial – controversy already exists and these battles have existed over the centuries. »

« People who think they are free are really enslaved and people who know they are enslaved are to some extent free. »

« Caste is the engine that drives India and India is a society of apartheid. »

« Even in supposed democracies, the people don’t matter (supporting her opinion that today governments and corporations rule together; they ride rough shod over the people). »

« Losing your space, losing your place is another form of imprisonment. »

« The caste system and capitalism have come together to form a very toxic establishment. Capitalism colonises your dreams. The world is being prepared to [accept] crude categories of identity. »

« In India even the fascists can’t march in time – somethings always gets screwed up ! I laugh out loud at the unpredictability, the anarchy of life in India. You can fight fascism and fundamentalism – but how do you fight stupidity ?! People are swimming around in a sea of nonsense most of the time. »

« Let’s remember all the September 11ths – [including] the Balfour Declaration which created the state of Israel and the first Iraq War, George Bush Senior’s war and the coming to power of Pinochet after the murder of President Allende. »

A piece of advice to share : » I have enough. I don’t want more. Such a position makes you strong and hard to manipulate. So much is delightful – to see joy even in the darkest places, one must seek out beauty in its lair. »

We are all students.”

The student audience gave her a standing ovation.

What shall we love?

Arundhati Roy: I claim that love of flags, nations and other patriotic manifestations have shown their limits. It is time to learn to love other things. Nationalism has too long fenced in people in their separate countries with tight borders and our imagination is under siege.  Writers don’t question enough this idea of nationalism. « I’m an anti-national and proud of it ».

What do you see as the end of imagination?: the inability to propose anything other than war.

Arundhati Roy: Creation of nation states linked to wars and genocides.  As soon as India stopped being a colony, it became a coloniser with its army deployed against certain areas.

Jean Claude Carrière added what we have to learn to love those who are different from us. Those who are like us are easy to love. Spoke of Pax Romana and centuries of peace in an immense empire which showed great religious tolerance. Even a temple dedicated to unknown gods!. Stability of the empire shaken when the Christian emperor demanded that only one religion be allowed. Diversity of empire censured and led to its downfall. Unification leads to chaos.

Arundhati:  two myths in India – myth of Hinduism (India is Hindu) and myth of tolerance. In India people saw themselves not as Hindu but as belonging to a caste. When Muslims came, many ‘outcastes’ converted to Islam and later to Chritianity or Sikhdom. But recently in India, with Hindu government, anxiety about demography. Fear of being outnumbered by other groups has led Hindus to woo Dalits and keep them in the Hindu fold. The rhetoric of India as a Hindu nation is fascist nationalism. In this nation, Muslims are like the Jews in Germany. Muslims are often attacked and lynched and terrorised. The battle in Kashmir keeps nationalism on the boil. So now Modi needs a war to put nationalism high on the agenda.

Both keen to colonise minds and the imagination. Many different colonisers in India. One can consider Hinduism as another form of colonialism. Using and misusing traditional myths to impose its superiority. Old myths are being contested.

Arundhati:  Capitalism is a new religion and has it prophets (and profits – my joke).  India was a non-aligned country before. Now an ally of US and Israel. This opened the lock that unleashed the free market on India and Hindu nationalism. Both have their own terrorists. The Maoists for the free market and the Muslims for the Hindu nationalists.  The rhetoric of terrorism allowed the creation of a police state. Religious chauvinism and depredation of the free market go hand in hand.

Bollywood.  In the 70s Indian films were for a popular audience, large cheap cinemas full of the poor. The hero for the film was a poor guy who fought against landowners, money lenders and corrupt politicians. Today the cinema is expensive, beyond the reach of the poor and the films don’t talk about them. The hero lives in an expensive apartment with helipad in the city. . The poor have disappeared form the cultural imagination.  When they appear in western films such as Slumdog, poverty is presented as a natural phenomenon, not apparently caused by anything.

Is there something fiction can say that non-fiction can’t?

Arundhati Roy: my body feels different when writing fiction and non-fiction. With non-fiction I want to intervene in the real world but with fiction I try to create a universe.

Arundhati explains why she thinks India is a corporate upper caste state: https://www.youtube.com/watch?v=Ej762GCi9Zc

Arundhati describes what she loves about India:
https://www.youtube.com/watch?v=VP-1-RTOgfE